The Southbound (SB) Rappahannock River Crossing was one of nine of the eleven projects submitted to the Commonwealth Transportation Board (CTB) by the FAMPO region for first Smart Scale project prioritization.  In May 2016, the CTB agreed to full fund the project through the construction phase. 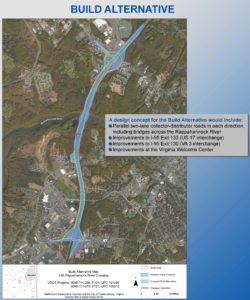 Project will add two collector-distributor lanes parallel to I-95 southbound between Exit 133/Route 17 in Stafford County and Exit 130/Route 3 in Fredericksburg. The new lanes will be carried over the Rappahannock River on a new bridge. Project also replaces the bridge deck and beams of the I-95 southbound overpass at Route 17, which is currently structurally deficient.

The Northbound (NB) Rappahannock River Crossing is scheduled to go forward for funding consideration in the next round of the Smart Scale process in September 2016.

This Smart Scale project is fully funded through construction in the FY2017-2022 Six-Year Improvement Program.

11.  Highway Other – Reconfigure access and parking at Rest Area on southbound I-95 (see Draft IMR)

01/12/2015  Editorial:  Rappahannock River Crossing should be state priority, too

To access files that have a “.pdf” extension, you will need to have Adobe Acrobat Reader installed on your computer. This software may be downloaded free from the Adobe website. Instructions will be provided during the download process.